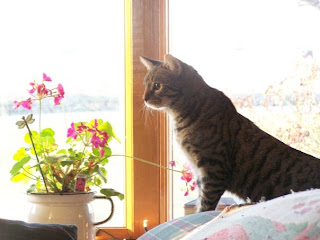 This is my cat Zeke. (Well not any more, but that’s a long story and a different story.) I’m not sure he’s listening to the plant, but he is very still and quite focused on the geranium. I had trouble picturizing listening to the small still voice of the Holy Spirit. This was the best I could do.

I had two friends today share rather incredible stories about specific, practical guidance the Holy Spirit gave them this week. Being in the process of making a major change in my life at the moment, I had the same experience of hearing God speak to me in a very clear and reassuring way this morning.

God cares about the circumstances and issues in our lives. There is nothing too big for his power, nor too small for his attention. He wants us to learn to talk with him and listen to him about all of these things. Janet Larsen, a 47-year-old dental hygienist, boarded a plane to Memphis to see her younger sister Debbie who was in the hospital in Louisiana. Debbie, 41, had suffered for seven years from a diseased liver and from kidney failure. Three years ago she had a liver transplant, which her body rejected. Without a successful transplant soon, the doctors put her life expectancy as a matter of months. As she settled into her seat, Janet prayed, “Please Lord, let me help give Debbie her life back.”

Seated next to Janet Larson on Northwest Airlines Flight 1815 was Alan Van Meter. Alan’s 25-year-old nephew, Mike Gibson, had been involved in a tragic accident the day before and lay brain dead on life support in a Springfield, Missouri hospital. The doctors told the family there was nothing left to do but harvest his organs and turn off the life support. The night before Van Meter had called the airline and gotten the last seat left on the plane, next to Janet Larsen, in order to go to Missouri to comfort his sister and her husband.

Alan sat quietly preparing for the emotional ordeal ahead. When he saw Janet studying an anatomical drawing, he started a conversation. As they both shared the reason for their trips, Alan suddenly said, “Hey, look we’ve got to do something about this!” In spite of the long odds of a compatible match, Janet’s stunned skepticism, and the incredible time and logistic barriers—Alan was convinced they should try and get his nephew’s liver for Janet’s sister. He picked up the airline phone and went to work. After hours of calls, miraculous interventions, and a number of other far fetched “coincidences” the impossible became a reality. Two days later Debbie awoke with a new liver, donated by Alan’s nephew, and a new lease on life. The transplant was accepted and Debbie is well on her way to recovering from her 10-year nightmare of sickness and decline. The transplant has also made a huge difference in Janet’s life. Seeing the miracle God worked with her one silent prayer has really opened her eyes to all that God wants to do in her life as she grows in her faith walk with Him.[i]

So what’s keeping you from hearing God’s small still voice? Are you too busy? Busy is a choice. Choose to take some time. Go some place quiet. Sit until your heart and mind are still. Ask God, “Is there anything you want to say to me Lord?” Listen.

One Response to "Are You Listening?"